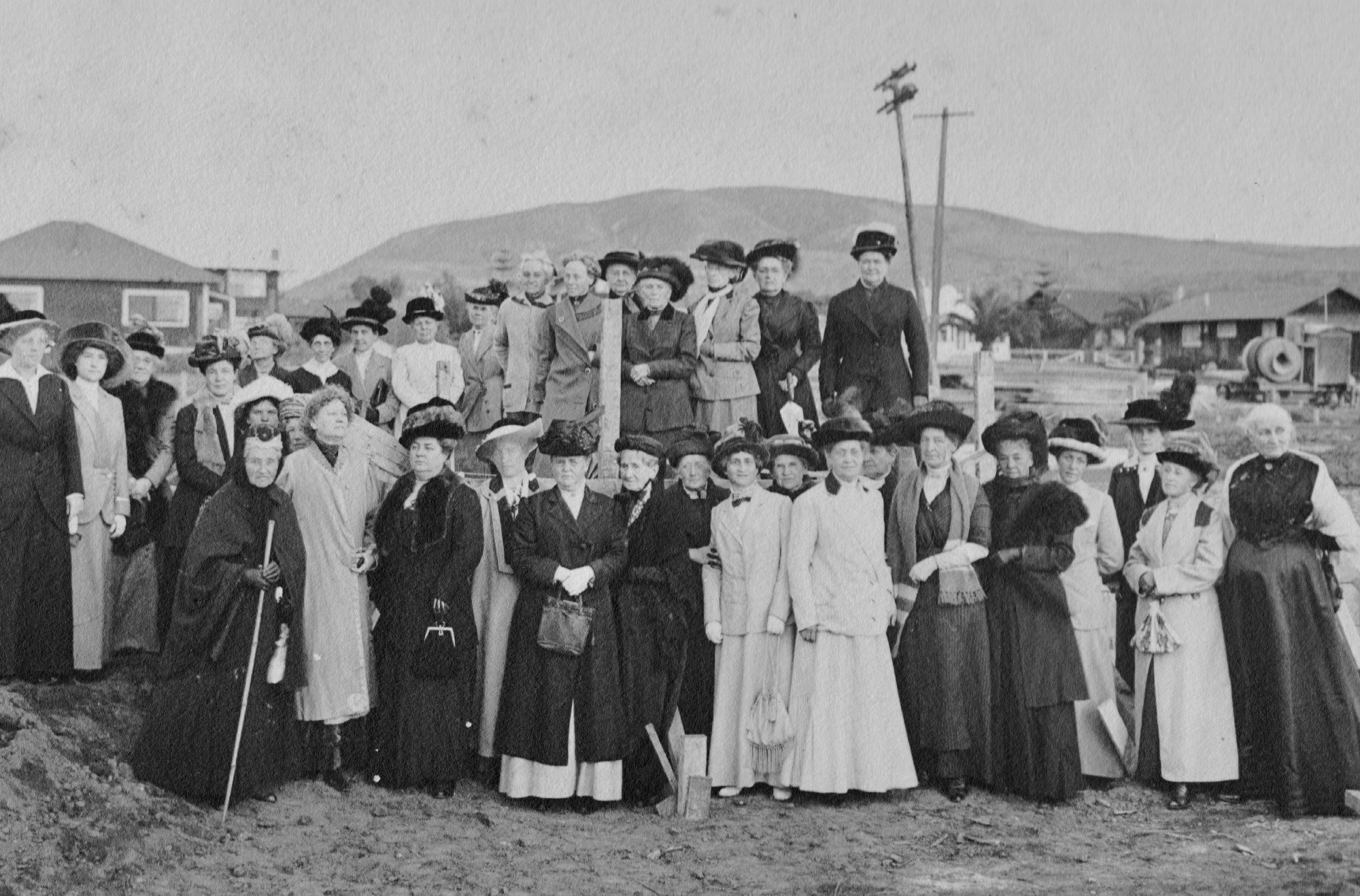 In 1914, Marjorie Henri, wife of New York artist Robert Henri, complained to her mother-in-law about the character of La Jolla. She wrote, “Women, women everywhere and none of them young or pretty…There are no men around—absolutely a woman’s town. They own everything and run everything and talk politics incessantly. Twang. Twang. Twang.”

The La Jolla Woman’s Club, founded in 1894, was the focal point for the activities of an extraordinary group of women who ran La Jolla at the turn of the twentieth century. The clubhouse, located on the corner of Silverado Street and Draper Avenue, was designed by modernist architect Irving J. Gill and paid for by the generosity of the village’s patron, Ellen Browning Scripps. One hundred years later, it stands as a testament to community spirit and civic activism.

Women’s clubs were founded on the notion that women, united, could change themselves and their world. The first clubs developed after the Civil War, drawing on the experience of women who had volunteered in the service of their country. They expanded rapidly in the 1880s and 1890s as women began to press for access to higher education and civil rights. Clubs became places where women learned how to speak in public, handle money, and exercise political influence without actually having the vote. They also provided opportunities for personal growth and creative self expression.

In the early years, La Jolla attracted a large number of women with spirit, intelligence, and the desire to further social change. Some were widowed; others divorced. Some were good church-going women; others dabbled in Theosophy and spiritual healing, held séances, and practiced yoga. Some were conservative, but most were progressives who fought for free speech and the right to vote. Together, they organized a women’s literary and current events club that became the La Jolla Women’s Club. Members met every Wednesday afternoon between September and June, gathering, first, at the La Jolla Hotel, next, at the library’s first Reading Room, and, later, in the Sunday School room of the Presbyterian Church or in one another’s houses.

At a time when few women had college educations, clubs provided a venue in which their members could step out of their domestic lives and engaged in “serious thought and work and study.” Members researched and gave talks on subjects that ranged from the California poets to the Boer War. They mobilized support for prohibition and addressed progressive issues such public health, social and industrial problems, and civil rights. They also participated in the hard-fought campaign for women’s suffrage that gave California women the right to vote in the national elections of 1912.

Membership increased significantly in the club’s first two decade. In 1901, there were 17 members; by 1914, there were nearly 100. Around 1910, members met at a community center known as the “Social Club” located on Herschel Avenue. After the sale of that property in 1912, clubwomen moved their meetings to the Union Church. It soon became clear that the club needed “a home of its own.”

In 1913, Ellen Browning Scripps decided to donate land and money for the construction of a permanent home for the La Jolla Woman’s Club. She settled on property located close to her own house and imagined “a simple, cottage-like building to cost about seven or eight thousand dollars.” Architect Irving J. Gill, however, convinced her that the structure should be built of concrete in the same manner as The Bishop’s School. Since she had no desire to supervise such a major project, she asked clubwoman Mary Ritter to take charge of the construction, “relieving her of everything but signing checks.” In the meantime, she offered the club the use of her own home for meetings.

The cornerstone of the new women’s club was laid on December 3, 1913, accompanied by a ceremony in which members thanked Scripps for her gift. Scripps described the ceremony in a letter to her sister, noting the irony of singing “Blest be the Tie that Binds” while standing around a water-filled foundation, hoping for the cement to dry.

Gill created a spare, elegant, and functional clubhouse in the modernist style. An article in The Craftsman magazine described it as an example of “the new type of architecture which is being worked out in California, namely, the strict adherence to the three great architectural principles of the square, the circle and the line.” The clubhouse was partially surrounded by a covered passageway, or arcade, made of reinforced concrete and built using the “tilt-slab” method of construction. Front and side rooms opened to vine-covered pergolas, gardens, and lawns that could serve as outdoor tea rooms, study spaces, and promenades. Inside, there was a large assembly room and several smaller meeting spaces. Walls were painted a soft gray color while cement floors were colored in mottled tones of light red, treated with an oil finish, and waxed.

Nature provided external ornament to the clubhouse in the form of palm trees, flowers, and vines. In August 1914, Ellen engaged horticulturalist Kate Sessions to lay out the club house grounds while Gill designed a fountain. A rose garden was planted on the sunny, south side of the club while a vine-covered pergola extended to the north. Walks were made of red brick laid in a herringbone pattern.

In 1914, the La Jolla Woman’s Club became an incorporated body to legally transact business and to accept the gift of the clubhouse and grounds. Members drew up a new constitution and set of bylaws and appointed a board of directors that included Mary Ritter as president and Ellen Browning Scripps as vice president. The latter stipulated that if the organization ever surrendered their charter and ceased to exist as a club, the title to the real property would revert to her, her heirs, and assigns.

The new clubhouse made possible large-scale entertainments and theatrical productions. In 1916, La Jolla women organized a Tercentenary Shakespeare Pageant commemorating the death of the bard in 1616, performing short selections from plays including Hamlet, The Merchant of Venice, and Midsummer Night’s Dream. They also put on a performance of Aeschylus’s Agamemnon. During World War I, they hosted dinners for hundreds of soldiers from Camp Kearny, followed by band concerts and dances.

La Jolla changed dramatically during the 1920s and ‘30s, becoming both a tourist destination and a residential suburb of San Diego. The La Jolla Woman’s Club became more of a social organization than a center for women’s education or civic activism. Fortunately, the clubhouse continues to stand as a reminder of the free-thinking, adventurous women who settled La Jolla and claimed a place for themselves in the modern world.

Photo shows members of the La Jolla Woman’s Club during groundbreaking ceremonies in 1913. Courtesy of The La Jolla Historical Society.

I am a professor of history at the University of San Diego and co-editor of The Journal of San Diego History. My academic honors include USD’s distinguished University Professorship and the Davies Award for Faculty Achievement. The descendant of a Californio family, I am the author of a number of works on San Diego history including the forthcoming biography, Ellen Browning Scripps: New Money and American Philanthropy, 1836- 1932 (University of Nebraska Press, 2017). For a complete list of my publications, see Academia.edu. View all posts by Molly

This is a text widget. The Text Widget allows you to add text or HTML to your sidebar. You can use a text widget to display text, links, images, HTML, or a combination of these. Edit them in the Widget section of the Customizer.
%d bloggers like this: